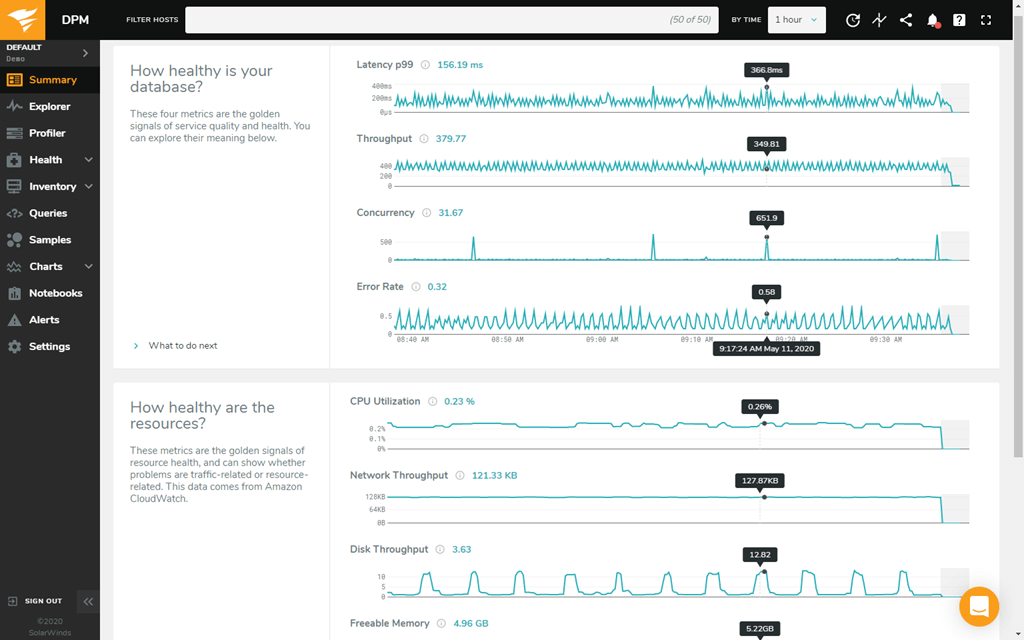 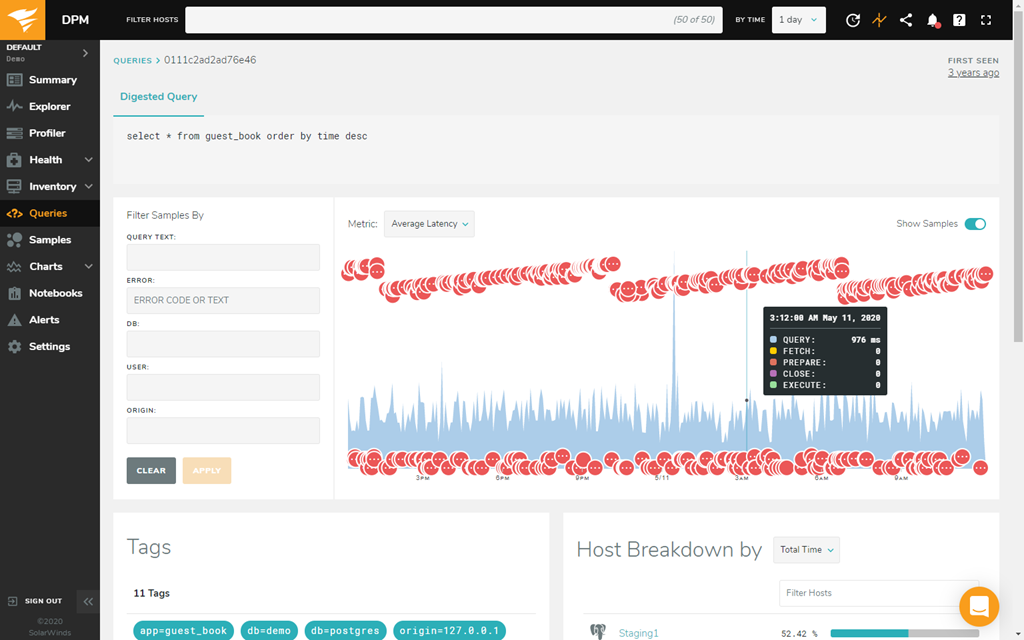 Visualize the data you need to pinpoint Redis performance issues with SolarWinds® Database Performance Monitor (DPM). DPM is built to measure throughput for every single query executing in microsecond resolution.

Built-in features like Top Queries are designed to show a master-detail view across all servers in your application, with per-second drill down into samples of queries and cross-correlations with other metrics. Drill down, thin-slice queries, and compare across time periods quickly for before-and-after change analysis.

SolarWinds Database Performance Monitor measures a broad set of metrics about your system and is built to collect up to 10,000 metrics a second from every server on your system. In addition to every metric exposed by Redis—including key metrics tied to memory, performance, and persistence—DPM monitors and classifies multi-dimensional data on other system components. When you have a problem, even if it only lasts a second or two, you'll have the data you need to diagnose and solve it fast. 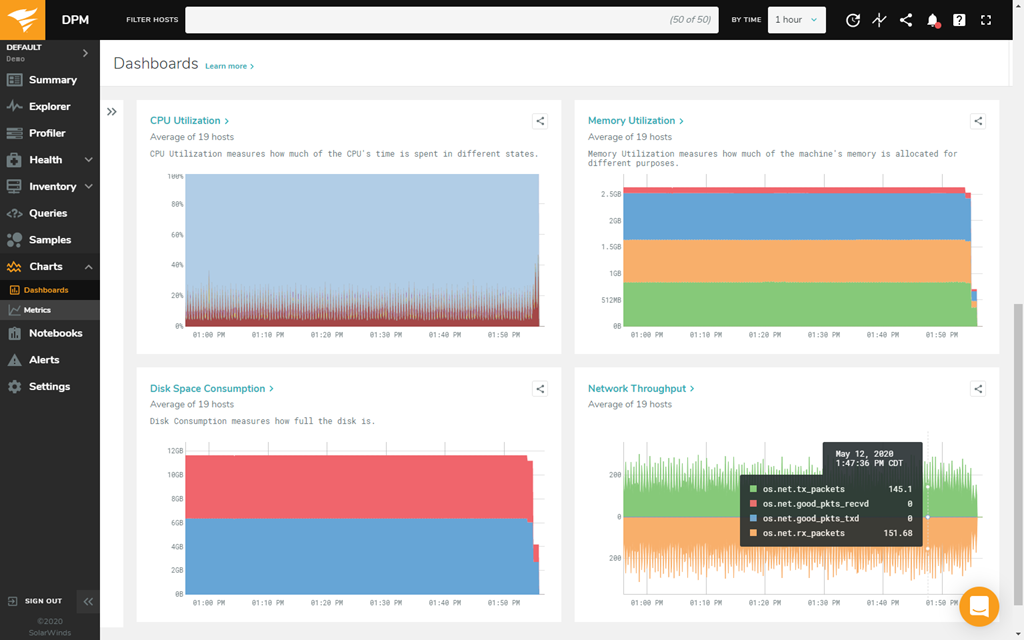 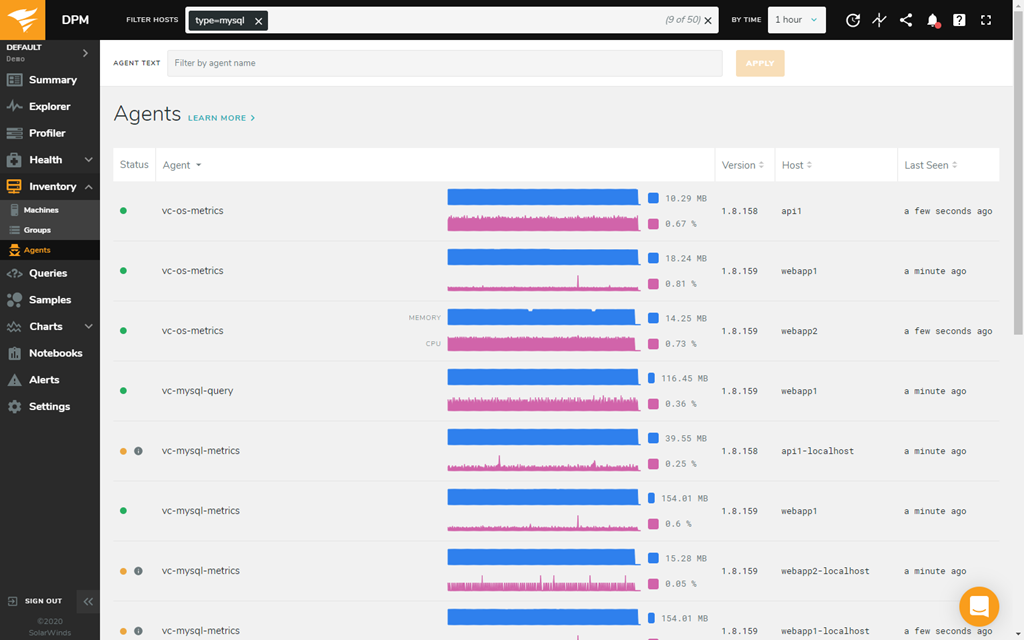 Get cloud-based monitoring with an easy, efficient Redis monitoring tool

DPM is a Software as a Service (SaaS) solution, so there's nothing to provision, buy, or maintain. DPM is updated and upgraded continuously, so you get new features automatically. DPM’s agents for Redis monitoring are completely passive, using techniques such as network traffic capture and inspection of system views. They’re safe, with data encryption in-flight and at-rest, and no inbound network access is required. The agents are built to be efficient and resource constrained, using less than 1% CPU. 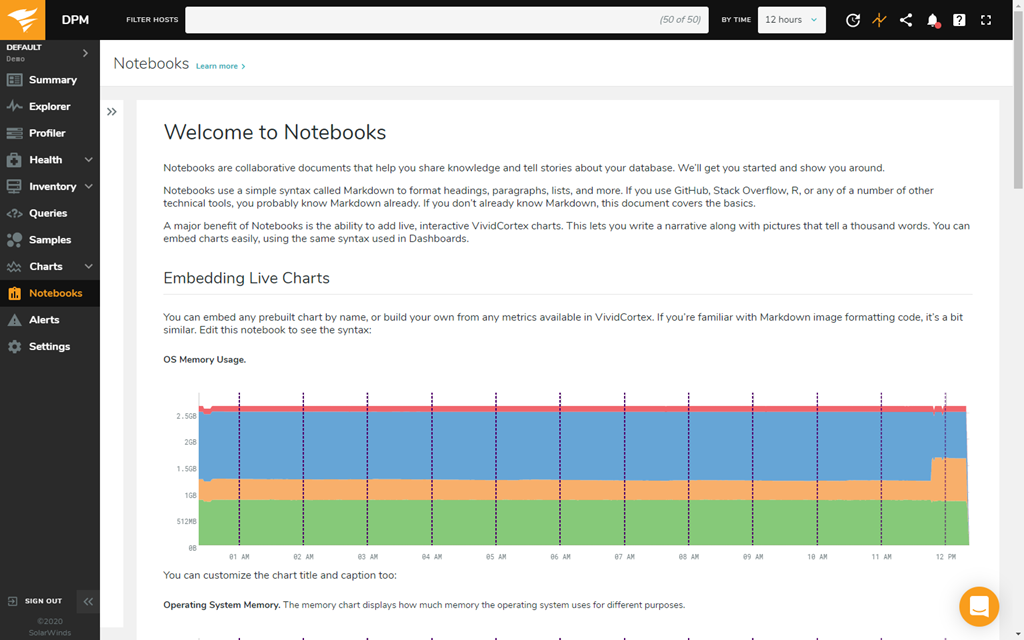 Make the most of cross-functional teams for monitoring Redis

DPM is designed for cross-functional teams. It enables application developers, DevOps, and DBAs to work together via a collaborative tool for problem-solving. Easy integration with chat, deep-linking, quick sharing, and other features make it a snap to show your teammates exactly what you're looking at. Use DPM in development and staging to catch problems before they're released to production. 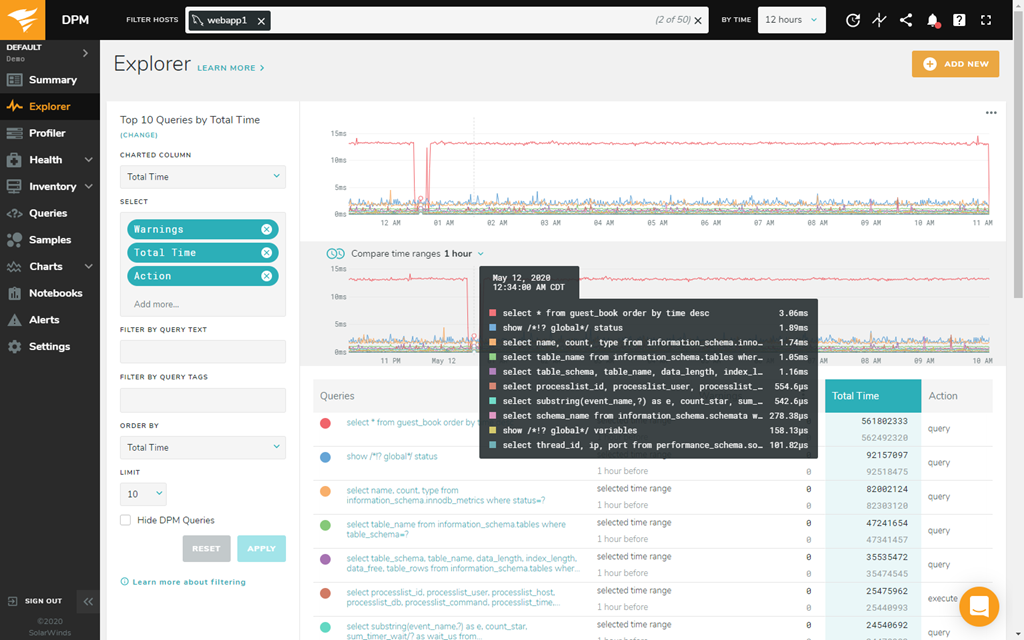 Compare query and system performance with before and after charts, and quickly search for newly introduced queries 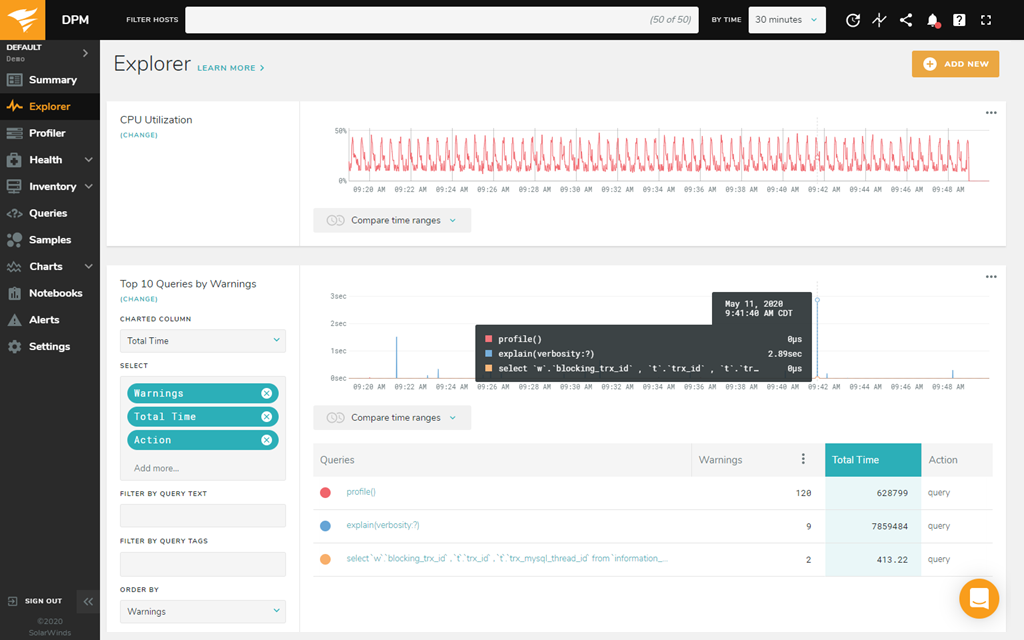 What is a Redis database?

The difference between Redis and a standard database is the way Redis stores data as key-value pairs containing strings, lists, hash sets, and sorted sets. Because of this, Redis is defined as a key-value store instead of an outright database. In addition to acting as a database, Redis can also act as a cache or message broker.

Redis achieves its outstanding performance—and its high speeds in particular—by using an in-memory dataset. It can run atomic operations like finding and retrieving members in a list, appending strings, computing set intersection, union and difference, incrementing hash values, and more.

One of the key features of the Redis database that makes it stand out is Redis Cluster. Redis Cluster lets you run a Redis installation where data is automatically shared across multiple Redis nodes. It also lets you continue operations even if some nodes can’t communicate at the moment or even if they fail entirely. Your operations won’t get stalled because of a few problematic nodes.

Redis has a few advantages over and differences from standard databases. Because of that, it necessitates constant Redis performance monitoring—particularly Redis Cluster monitoring—to maintain performance and catch issues before they have a significant impact on end users.


How to monitor Redis database performance

Redis performance monitoring, which includes Redis cluster monitoring, Redis queue monitoring, and more, is a process involving tracking key metrics and queries to prevent bottlenecks or other performance disruptions. It helps you catch problems in two key areas: issues with resources in Redis itself and problems elsewhere in your infrastructure with an impact on Redis performance.

The first step of any database monitoring plan is determining what exactly needs to be monitored. For Redis performance monitoring, you want to ensure you have insight into:

With Redis, monitoring database performance involves collecting and analyzing key metrics tied to everything from memory and persistence to errors and basic activity. Since the Redis database management system relies on main memory for its data storage, memory metrics are particularly important. These include stats like used memory, cache hit ratio, memory fragmentation ratio, blocked clients, and evicted key stats.

When it comes to Redis queue monitoring, network traffic is another important metric. An unexplained change in traffic could indicate broken connections between the application and the data source. This can translate into a drop in performance if the issue isn’t addressed quickly.

With so much to keep track of and so much on the line if a problem slips through the cracks, it’s imperative for anyone using Redis as a database to use a Redis monitoring tool. A tool can monitor your key Redis metrics down to the second and keep track of your queries, measuring throughput for every single executing query.


How does Redis monitoring work in DPM?

SolarWinds Database Performance Monitor (DPM) is a user-friendly Redis monitoring tool designed to help you reap the benefits of database monitoring without breaking the bank. DPM offers 24/7 monitoring and performance analysis to help you identify and address issues as they arise—before they have a significant impact on the user experience.

As with any Redis monitoring tool, the most important element of DPM is its ability to monitor key metrics. Database Performance Monitor is built to capture more than 10,000 metrics every single second from each system the tool is monitoring. This level of granular data collection makes it easier to troubleshoot and resolve problems fast.

Managing queries is another key element of Redis performance monitoring. DPM’s Top Queries view gives a master-detail view of all the servers on your system, letting you conduct per-second drill-downs into cross-correlations with other key metrics like I/O and CPU, samples of queries, and EXPLAIN plans. DPM is built to help you drill down from a global view to a single query within seconds, so you can get to the bottom of potential issues.

In addition to keeping the database running smoothly as a Redis Cluster monitoring tool, DPM also includes features designed to help you optimize Redis database performance. It helps you tune your database tables, check queries in aggregate, and figure out whether your database is functioning at its expected performance level.


Get in touch with a Solarwinds Solutions Specialist today to Learn More!

Sign up today for our weekly newsletter that contains the latest product news and exclusive promotions for our customers.